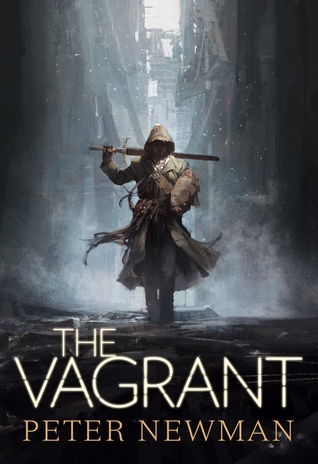 Today we come to a book I have heard great things about for the last couple of years. Peter Newman’s The Vagrant. Where to begin with this? Oh wait. I know where. Never have I cared so little for the characters in a book. There is no word in any language to describe how few fucks I give about these characters. A quantum supercomputer could spend a thousand years calculating and still not come close to the number of fucks I do not give about them.

On the flip side neither do I hate them. I don’t feel anything for them. I did not root for them succeed nor did I root for their ruination. I just didn’t care. And I don’t really know how to react to that. Every book I have read up to this point as engendered some emotion in me concerning it’s characters. Whether fury or frustration or love or disgust… there was something but the Vagrant? Nothing. I have a solid reason for why this is and I’ll get to it in a moment. First I am going to give credit where credit is due.

The world is awesome. It is this wonderful mix of fantasy and science with a healthy dose of sword and sorcery style. Very Moorcockian in this respect. The cities have more personality than the characters. The demons are by far the most interesting parts of the book. Their nature, magics, and societies is rife with story potential and cool imagery. The flashback sequences dealing with their coming was fantastic. Two of the demon lords – The Usurper and the Uncivil – are the most developed characters in the entire story. If the entire book had been about the politics and wars of the demon lords it would have been fantastic. Unfortunately this was not the case.

The book chooses instead to embrace gimmick over substance. A mute (not really) vagabond (straight up paladin) carrying a baby (I’ve read Lone Wolf and Cub before) carrying not Stormbringer wanders from side quest to side quest with only the vaguest of plots. The reason I call this gimmicky is because so much information is hidden behind the muteness – or at least it seems that way till you get later in the book and all the big reveals are about as shocking as a Maury paternity test. The whole plot of the book can be summed up as idiot (seriously he does basically nothing but hack up mooks and make stupid decisions) travels north solving side quests while his sword handles the main story. That’s it. There is no pay off at the end. No climax at all.

Spoiler Warning from here on out.

Sufficiently warned? Good. Now a good question might be why was there no climax and there are answers to that. The first is poor writing. There is no substance to the ending. It is meet angels (who have no personality and none of the style of the demons), be told to do something, refuse, and build a home with his heterosexual life partner (and endless, non stop exposition machine!) to settle down. That’s it. And supposedly the book is GrimDark with it’s paladin hero settling down in his happy home at the end with literally not a single consequence from his journey and decisions.

How did this book get so many good reviews? Actually I have a thought about but I am going to get to that topic last.

The other reason the end had no pay off harkens back to the reason I had no emotional connection to the characters. The one I alluded to earlier. The writing voice. It masquerades as third person limited but it’s not. It’s third person nothing. No emotional context to anything that isn’t provided by the Vagrant’s incredibly limited body language. You might as well be watching through a camera lens. No internal insight. Just action direction and sparse dialogue (until Mister Exposition shows up!). Contemplating this bizarre emotionless writing style it struck me that this isn’t a book. It’s a screenplay because it lacking any emotive element. It’s missing a dimension and it just rips the book apart.

Now  the reason it gets so many good reviews… this is something I see fairly often from critics, hipsters, and professional artists of all kinds. When you consume mass amounts of a medium everything starts to seem the same. Watch enough movies and they all blend together. Listen to enough music and you become convinced modern music sucks compared to the classics of your youth. Read enough books and everything starts to look like a mash up of other things you’ve seen. Especially Eragon. So when something different comes around that novelty is like a spotlight shining down on it. It artificially elevates it and the pleasure one gets from experiencing something different makes the weakness fade into the background. That novelty makes it stand out and to many jaded consumers that makes it good in their eyes – no matter it’s issues. This is a cognitive bias where the short term novelty out weighs the actual quality.

All in all in leads to hype like what the Vagrant has. I can’t recommend this book. I am a huge bibliophile and I could barely make it through it.  Maybe it would be a better movie than book so it could have that missing dimension. Overall it was boring, predictable, and utterly unsubtle. Nuance was not a technique used here.

Save yourself the boredom. Go read Lone Wolf and Cub instead of this. Shit read the instructions on a pancake box instead. There will be a better pay off.

Up next – Fuck You, John Ringo! Pt 2: The Fuckening

2 thoughts on “Side Quest: the Motion Picture!”