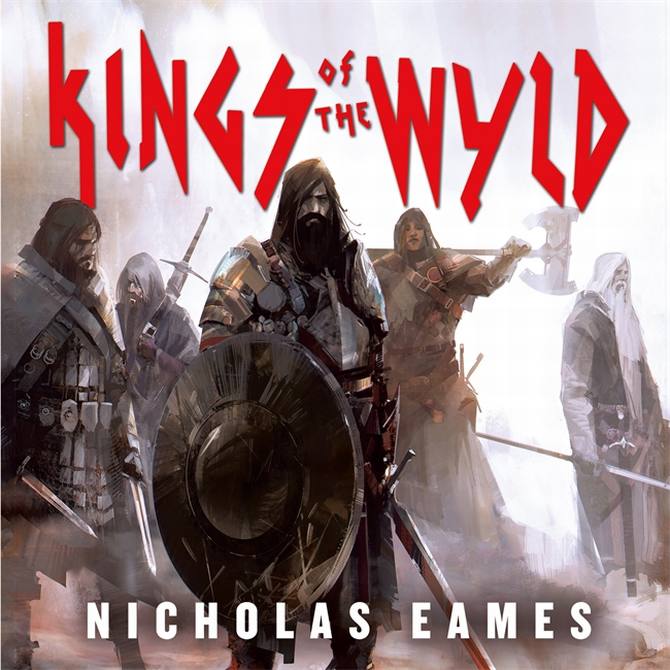 Let me start off by saying that Kings of the Wyld by Nicholas Eames managed to do something that rarely happens in my experience. It lived up to the hype. In fact it surpassed the hype. And that virtually never happens for me. Usually when I hear large numbers of people praising something it ends in disappointment for me. The Force Awakens, Game of Thrones, prom… all highly spoken of and all ended in disappointment (One ended in me almost being arrested. I’ll let you guess which one.) but Kings of the Wyld? Not at all.

Quick synopsis. A group of once renowned heroes come out of retirement for one last adventure – saving the daughter of one of them from a horde of rampaging monsters. It’s a simple set up as things go. It sets a tone early with that concept. You can feel the reluctance of the pov character Clay Slowhand to go back on the road. You can see the desperation of the once great Golden Gabe as he struggles to get everyone back together to save his daughter. The characterizations drive this book and drives it like a trucker on a 3 day meth binge that has less than an a day to get from Texas to Montana.

To me this book and part of why it is instantly near and dear to my heart is that it feels like a good Dungeons and Dragons adventure. Not like the D&D novels which are what a lot of roleplayers imagine their adventures look like but like an actual group sitting around the table. Over the top personalities, insane plans, rule of cool magic, awesome magical items, and a wide variety of monsters. Moments of seriousness are mixed in with in jokes and gags between friends. All layered over rich world building.

What stood out to me the most was the humor. I am not overly a fan of humorous writing most days with a few exceptions (Piers Anthony & Christopher Moore mostly) but the comedic timing and voice is phenomenal. There is a scene where Golden Gabe and Clay Slowhand give a farmer two golems (it’s the end of a wild scene) and I read the following: “The first thing the farmer had them do was wave to us as we left. So that was fucking weird.” I fucking lost it laughing. The dry, sarcastic commentary that the author colors the world with through the lens of Clay’s thoughts delivers moment after moment like that.

My single favorite bit of comedic writing from a book – Owl Bear Enthusiast is a close second though – is in this book. One of the members of Saga – the official name of the Kings of the Wyld – is Ganelorn. At this point you don’t know much about Ganelorn beyond the fact that everyone else is scared of him and he is a swirling vortex of negative fucks given about almost everything. They’re in a bar and Clay is having a great back and forth with the leader of the Screeching Eagles – forgive me Screaming Eagles – while Ganelorn is having a drink. The Eagle draws his sword and the following is written (might not be verbatim as I am writing this from memory. My better half currently has my copy of the book.) – “In the silence Clay heard the soft but ominous sound of Ganelorn’s mug hitting the table.” – and then after a break – ‘The story of how the Riot House burnt down is told of in many stories.” I couldn’t breath for a minute i was laughing so hard. Shannon – my poor suffering better half – came in to my office to check on me because of how hard I was laughing.

Ooooh… Ganelorn is my spirit animal.

Now that being said the book is not perfect. It has some of the earmarks of a first novel. There is a certain reluctance to do anything permanent to the main characters which I suspect may have something to do with them being based off of characters from a tabletop game and emotional attachment there from. I could be wrong on that but the D&D influence is strong in this one. There is a tendency to tell rather show on the world building side but it is done very entertainingly so it doesn’t stick out much. There are a lot of side characters and not a lot (or at all in a number of cases) of development with them to the point that I feel a smaller number with more development would have been better but overall these are very minor gripes. The book more than makes up for them.

So go out, pick the book up, kick back with the soundtrack (as provided on Nicholas Eames own site here: https://nicholaseames.com/soundtrack/), and enjoy! And Nicholas if you read this I really want more Ganelorn or Lady Jane (I really hope I’m remembering her name correctly).